I had no intention of ordering chicken wings from Uber Eats tonight for dinner. I had plans to meet some friends around 7pm for coffee. After pursuing the menu at our meet up point, I decided maybe I should grab something to eat beforehand and stick to coffee at the coffeeshop. At that precise moment, a coupon code for $15 off an Uber Eats order appeared in my inbox. It’s something I had never actually done before, but after a quick peak at the offerings, I noticed the Sweet Chili Cilantro Wings on the menu from TD Burger located in the Atlas District. At the cost of 99 cents after Uber fees, it was an offer I couldn’t refuse. And I’m sure glad I didn’t.

Listed on the menu for $10, I received 11 wings. Pretty standard for wings in the area. (Anyone else remember 10 cent wing days in college?)  And yes, since my food was being delivered by an Uber driver, I was worried about how hot they’d be when they got to me despite TD Burger only being about three quarters of a mile from my office. I was pleasantly surprised to find them still piping hot.

I requested an extra blue cheese through the app, and I received one at no additional charge. +1 for TD Burger. However I immediately noticed that there was no celery. -1 for TD Burger. Despite your typical clear plastic take out container and the lack of accompaniments to round out the dish, these babies looked good from the start. It could have been the extra time to get to me versus how quickly you’d get them in the restaurant, but a great deal of the sauce had slipped off the wings and pooled in the container. Normally I’d be annoyed by that, however on this occasion, the stickiness on the sauce left a fantastic glaze coating on the wings that aided the crunch factor. From the first bite I knew I was going to enjoy these wings. There was a very good crisp to the bite. They were cooked well, and must have been lightly dredged prior to frying because they had a super light breaded feel to them.

Altogether the container had plenty of sauce. The sauce that had dripped from the wings turned these wings into a choose your own adventure of sauciness that I enjoyed. With your typical wing sauce, you don’t see much other than the straight color of the sauce. Not so here. The sauce was filled with garlic, fresh greenery, chili flakes, and crushed red pepper. It made for very visually appealing wings.

Based on the ingredients I could see, I wished there was a little more depth to the flavor. The garlic notes would come through on occasion, but the sweetness largely dominated my palette. The chilis brought a mild spice with a slow build that never truly amounted to the heat I would have preferred. I’d declare these relatively safe for those of you who can’t stomach anything beyond an ever so slightly more than mild heat.

Though the main note was very sweet, I enjoyed them from start to finish. The crunch, the glaze, and the DIY aspect of the extra sauce were enjoyable. They stayed hot through completion.

I give them decent marks for complying for my request for extra blue cheese. But to not have any celery was disappointing. The Upstate New Yorker in me just can’t understand why you wouldn’t include any. It’s such a minimal cost to the restaurant, and it would have been great to scoop up some of that extra sauce.

And in the event that you’ve never tried Uber Eats…download the app and try the first timers code for $15 off your first meal. I’m not sure if it’s a longstanding promotion, but feel free to give it a try: EATS15DC

Summary An unplanned Uber Eats purchase left a sweet taste in my mouth. If you like sweet sauces, I'd recommend these Sweet Chili Cilantro wings from TD Burger. 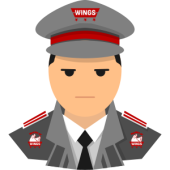 The Wingspector General originally hails from Upstate New York, the birthplace of Chicken Wings, which automatically makes him an authority on all things wings. To the General, wings are much more than an appetizer. They are history, and a way of life. Introduced into his diet at an early age, wings quickly became a staple. His waist, knowledge, and love of wings have been growing ever since. In 2009, he relocated to Washington, DC. Since then, he's been on a quest to find the best wings in the area. He makes his home on Capitol Hill with his wife and soon-to-be-born son, whom he will mentor in the way of the chicken wing.